The Life of Jesus Critically Examined 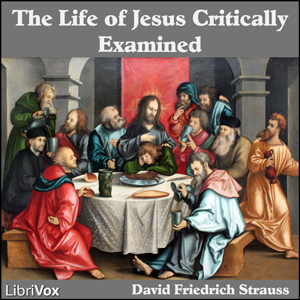 The Life of Jesus Critically Examined

Strauss was an early pioneer in the ongoing 'Quest of the Historical Jesus' held amongst New Testament scholars, and his Life of Jesus is one of the few landmarks in the field. The first edition of Strauss' book was published in Germany in 1835 when he was only 27 years old, and which by 1840 had gone through four editions. He focused his attention on battling two theological fronts which were current at the time - the traditional Orthodox who believed the miracles in the Gospels were to be taken as literal, yet supernatural, history; and the Rationalists, who believed that the Gospel miracles were all true but could be explained by natural and purely physical causes. Strauss rejected both camps and, in a scrupulous and detailed historical analysis of the Gospels, concluded that the Gospels are historically unreliable, not because the Evangelists were deceptive, but because they were preachers who wrote their Gospels as convictions of Faith in a mythological framework. Strauss further argued that anything that can be known of the Historical Jesus is hopelessly buried under accretions of legend and myth.

The price that Strauss paid for publication was high – his Life of Jesus scandalized Europe, and caused a sensation rarely seen by philosophical or theological works. Dozens of books, mostly from Germany, were written in rebuttal. The Life of Jesus cost Strauss his post at Tübingen University, and ultimately his career. However, his argumentation proved too influential to be ignored. The school of Rationalism died in the 19th century, due in no small part to Strauss' criticism. The traditional Orthodox that Strauss criticized partly evolved into Fundamentalism in the early 20th century, and was in large part a reaction to the groundbreaking path started by Strauss and his revolutionary work.

Medical missionary Albert Schweitzer described Strauss' Life of Jesus as, "one of the most perfect things in the whole range of learned literature. In over fourteen hundred pages he has not a superfluous phrase; his analysis descends to the minutest details, but he does not lose his way among them; his style is simple and picturesque, sometimes ironical, but always dignified and distinguished". (Introduction by JoeD)

Impeccable reading by JoeD of a demanding text.

Reviewer: bowhows - favoritefavoritefavoritefavoritefavorite - January 30, 2012
Subject: Important in the History of Biblical Study
This book is an amazing accomplishment for a brilliant 27 year old theologian. Joe has done a wonderful job of reading it clearly, doesn't rush through it, and keeps it from becoming dry.

Uploaded by librivoxbooks on January 28, 2012